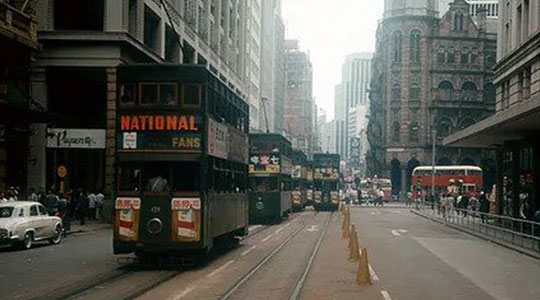 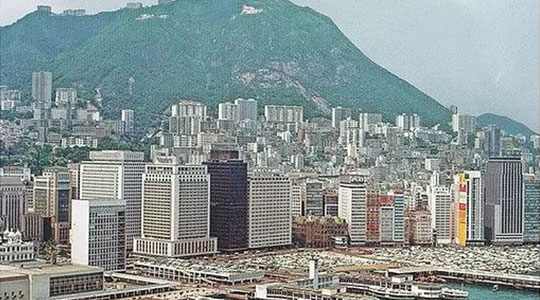 Became a colony of the British Empire in 1842 at the end of the First Opium War. Originally restricted to Hong Kong Island, the borders were later extended in stages to include Kowloon in 1860 and the New Territories in 1898.

Hong Kong was to remain under the British Empire until the transfer of sovereignty over Hong Kong to China that took place on 1st July 1997. This historical event signalled the end of the British administrative era in Hong Kong. For the ordinary Hongkonger, there was a wave of mixed emotions. Indeed, it was a time for celebration, having the opportunity to experience and witness such a historical moment. However, it also ushered in an uncertain future and a sense of the unknown.

China assumed sovereignty of Hong Kong under the 'one country, two systems' principle. Hong Kong’s constitutional document - the Basic Law of Hong Kong - guarantees that Hong Kong’s current political situation, capitalist system and way of life will remain unchanged for 50 years. As a special administrative region, Hong Kong will maintain a separate legislature, executive and judiciary that is different to Mainland China. The rights and freedom of the people will continue to be based on the fair rule of law and an independent judiciary.

HONG KONG (香港 / hoeng¹ gong²) - A vibrant and cosmopolitan city where the cultures of the East and West merge in perfect harmony. 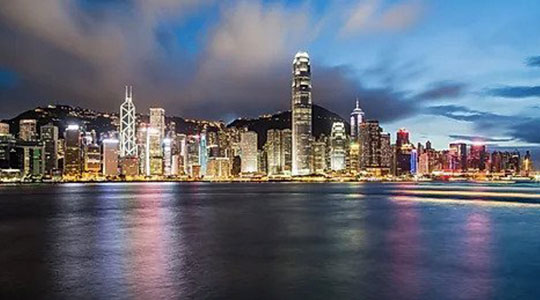 Fondly known as The Fragrant Harbour, Hong Kong has retained her charming Chinese roots while effortlessly keeping pace with the changing faces of the modern world. Her most valuable asset are the hardworking people, who combined with strong work ethics, good education and a never-say-die attitude, have contributed to Hong Kong’s success in every way. 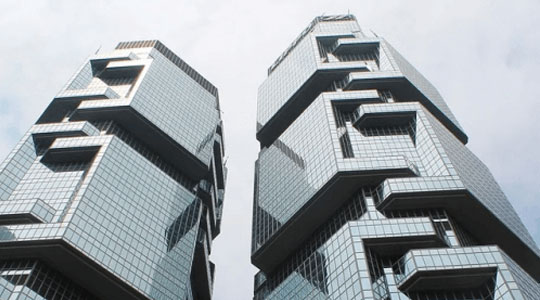 Hong Kong is a significant global financial and business centre, with a comprehensive network of financial markets and institutions having a presence in the city. Simple low taxation, a business-friendly setting, one of the world’s most traded currencies, rule of law, a level playing field – these are a few of Hong Kong’s business characteristics that have attracted many foreign investments. 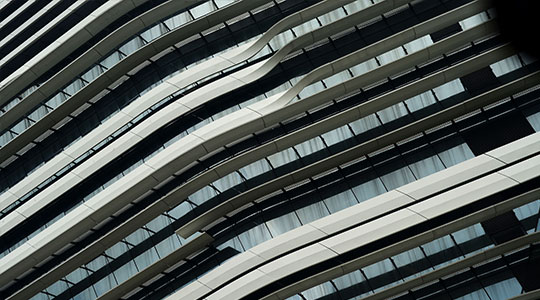 Though it may give an appearance of chaos and confusion to a newcomer, Hong Kong is a thriving, energetic and efficient city to live and work. Locals and expatriates are spoilt for choice over the vast array of lifestyle activities available -  be it enjoying a meal at a Michelin-star restaurant, hiking at MacLehose Trail or just soaking in the cultural richness of the city. 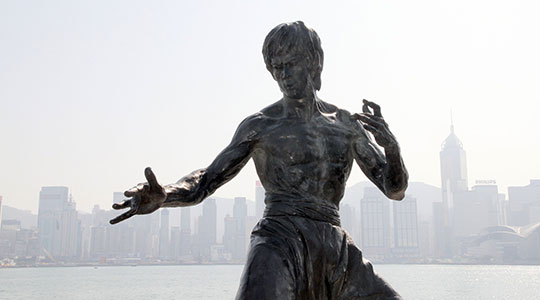 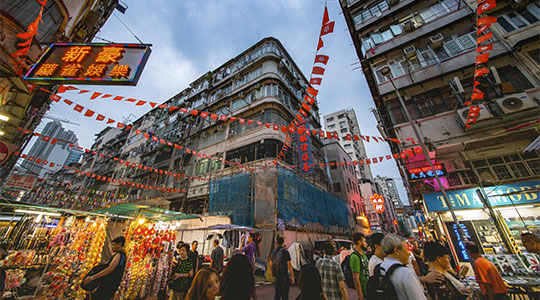 Hong Kong has a population of approximately 7.3 million (as at 2016).  Over 90% of Hongkongers are ethnically Chinese, with foreign nationals – the major groups being from Philippines, Indonesia and India – making up the balance. The average population density is 6,780 people per square kilometre.

Influenced culturally by their Cantonese roots, concepts like 'saving face' and 'modesty' is predominant in their way of life. However, with Hong Kong’s rise as a global financial player attracting many foreign participation, the return of many overseas-born Hongkongers with foreign passports post-1997 together with the Hongkonger’s love for innovation and all things new and foreign brought about an influence of Western values that have grown on the people.

In short, Hongkongers today are a unique group of people with an identity that is fluid and always evolving.  They are always in a hurry, stabbing lift buttons to make it move faster, jumping through the closing doors of the MTR with Jackie-Chan swiftness and the volume of an average conversation will leave a ringing in your ears. On the other hand, they are fully capable of holding their own in a boardroom or igniting their senses on a night out listening to the Philharmonic orchestra. 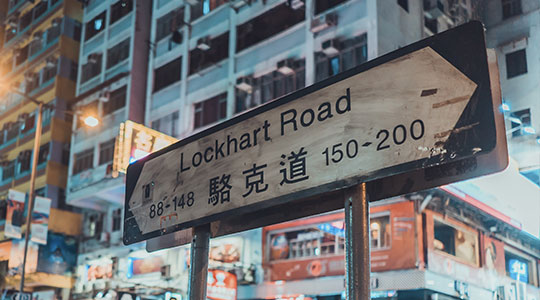 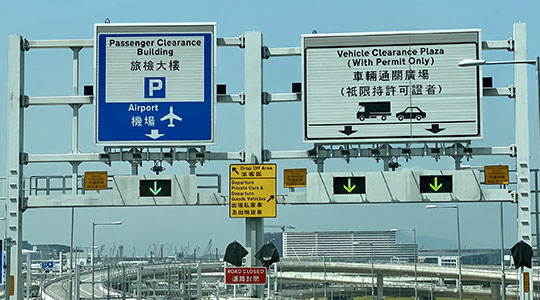 Chinese CANTONESE (廣東話 / gwong2 dung1waa2) and English are the official languages of Hong Kong. However, since the return to China in 1997, the Government has implemented a ‘biliterate and trilingual’ policy in the hope of training the future workforce to be biliterate in English and Chinese and trilingual in English, Cantonese and Putonghua (form of Chinese spoken in Mainland China).

Cantonese is most commonly used for daily communication. The business, professional and legal sectors use English widely to conduct their business and all Government related communications, notices and signs are in English and Chinese. Though many Hongkongers in the workforce have made great efforts to increase their proficiency in Putonghua, many are proud of Cantonese as their ‘mother tongue’ heritage.

However, the proficiency of English by general workers, taxi or bus drivers, movers and security guards may not be up to the average Western standard. It may help to learn some basic Cantonese to adjust to life in Hong Kong. 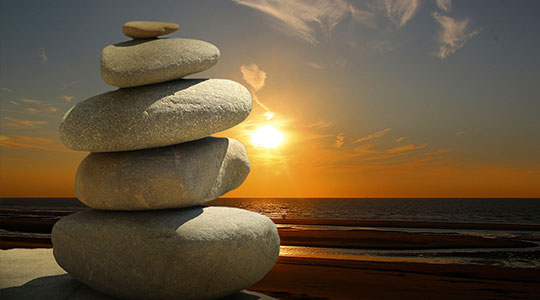 Hong Kong enjoys a high level of religious freedom, one of the fundamental rights covered by the Basic Law. There is a large variety of religious groups in Hong Kong which includes Buddhism, Confucianism, Taoism, Christianity, Islam, Hinduism to name a few. They offer religious instructions, operate schools and take part in the provision of health and welfare facilities. The teachings of Buddhism, Confucianism and Taoism have the most followers. 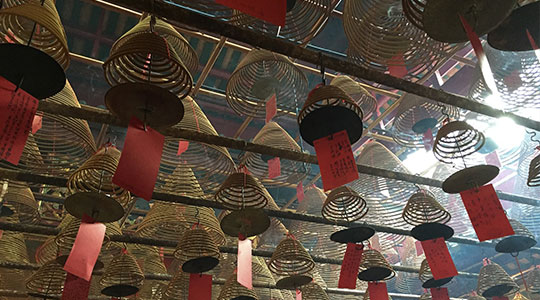 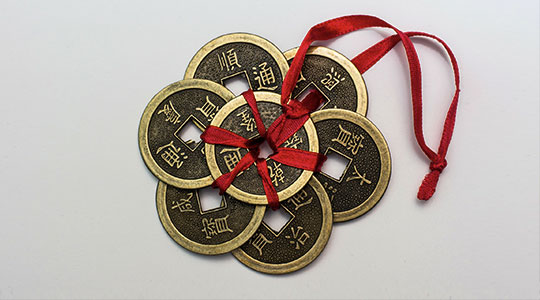 One fine example is the Taoist concept of FENG SHUI (風水/ fung1seoi2) based on the five elements—water, wood, earth, fire and metal—and chi (energy). Simply explained, chi moves and changes depending on the elements to achieve harmony with the forces of nature. This belief is taken very seriously and many companies must consult a feng shui master before making a major commitment. Another obvious superstition is the missing 4th floor in Hong Kong buildings as the number “4” when spoken sounds like ‘die’ in Cantonese. 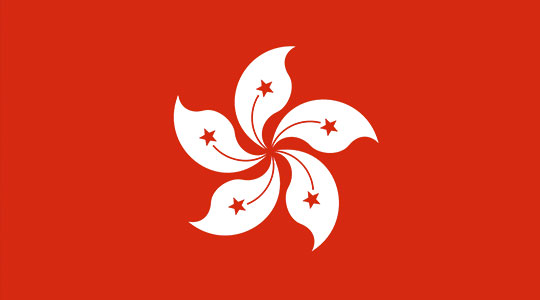 Hong Kong enjoys a sub-tropical climate with temperatures dropping below 10° Celsius in winter and exceeding 30° Celsius in the summer. Spring is warm with high humidity levels, Summer is hot with heavy downpours, Winter is cool and dry with occasional dips of the mercury and Autumn is sunny, pleasant and dry. 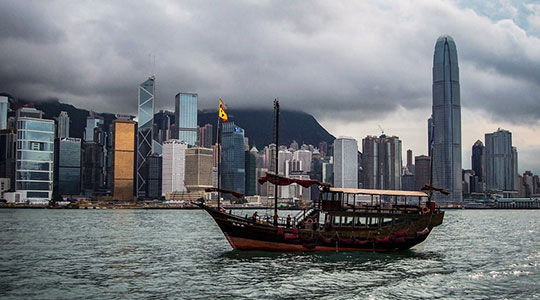 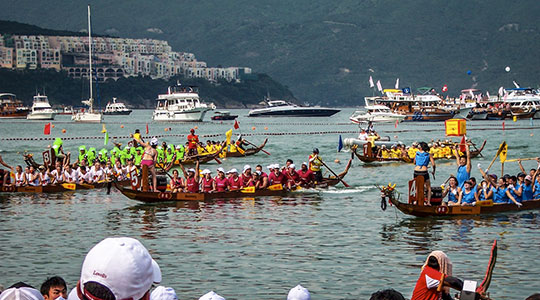 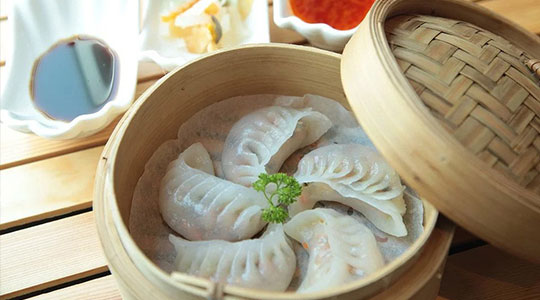 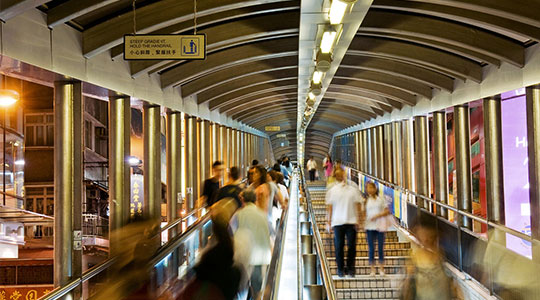 It’s not a building but it is still an architectural wonder – The Central Mid-Levels Escalator is 800 metres long with a vertical climb of 135 metres. The total travel time is twenty minutes connecting Central district to various locations along Mid-Levels. It is the longest covered escalator in the world (yes …the WORLD).

Look out for them 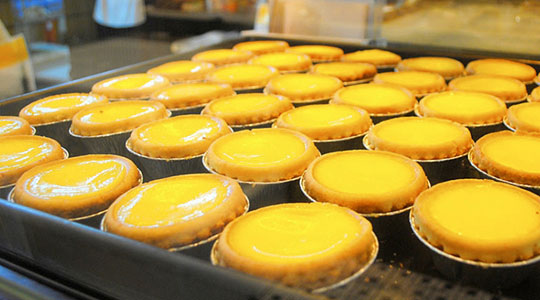 The origins are unclear but seems to be influenced by the British custard tart. It comes in either a flaky pastry or sweet shortbread crust. Find them at the char chaan teng (local coffee shop) , bakeries or yumcha restaurants. 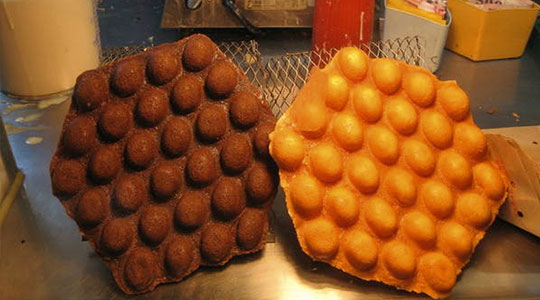 The origins are unknown but every Hong Kong grandmother remembers having it as a kid. The modern version comes with a variety of flavours like matcha, chocolate and purple sweet potato. Find them at street vendors. 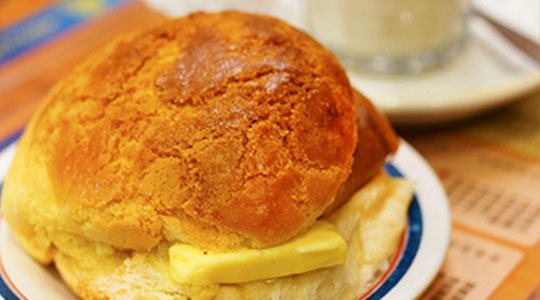 In 2014, it was listed as part of Hong Kong’s intangible cultural heritage by the Hong Kong Government (Yay!). But hey, it doesn’t have any pineapple in it. Err, what? Its name originated from the appearance of its chequered top crust which is baked to a perfect golden-brown colour resembling the skin of a pineapple. Find them at char chaan teng (local coffee shop) or bakeries. ​ 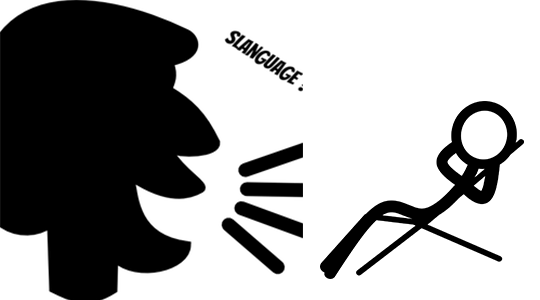 Yeah, we love our slangs – learn a few to blend in with the locals.

Hea – (pronounced as ‘hair’ with no diction) - To relax, do nothing meaningful, to chill
Sub bok (十卜) – To encourage someone. Sound and meaning derived from the English word ‘support’
Fu Look (負碌) -  To describe something happening out of luck. Sound and meaning derived from the English word ‘fluke’
Dik Hon (滴汗) – A reaction upon finding out something unbelievable or could cause trouble. Literally means dripping sweat.
Fong Fei Gei (放飛機) – To stand someone up or being stood up on a date or social gathering. Literally means fly an aeroplane

We have special signs! 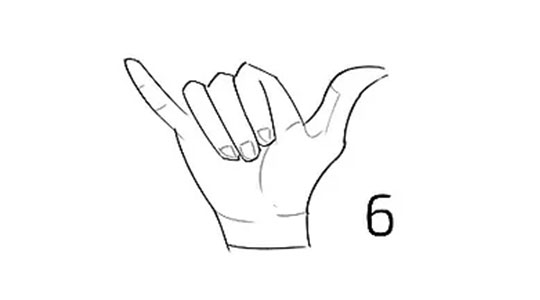 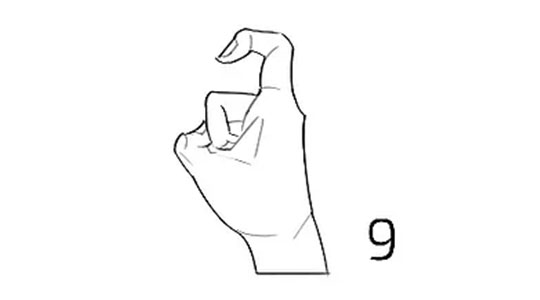 Curl your index finger down to make the shape of the number "9." 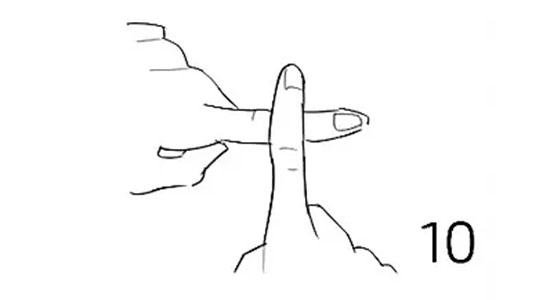 Next time you want 10 of anything, just show the storekeeper or waiter this hand gesture! 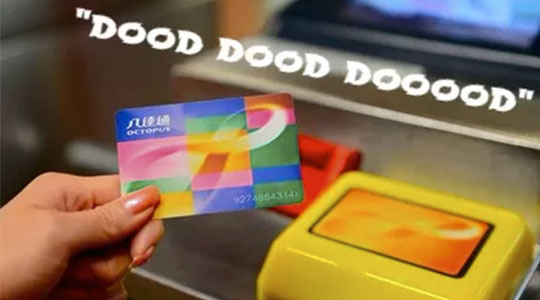 It’s our wonder card! Just swipe and you can ride all modes of public transportation, buy fast food, snack, groceries and pay for parking too!  Oh yeah – did we mention? You first need to top up the OCTOPUS card.